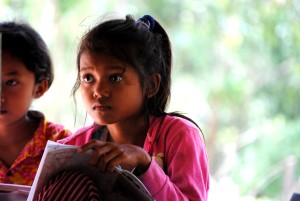 World Education has over twenty years of experience in Cambodia, with an emphasis on education in formal and non-formal settings, youth development, capacity development of local NGOs, and cooperation with government agencies. World Education’s first project in Cambodia, a health education project funded by USAID, began in 1991, and was followed by contracts working with the Ministry of Agriculture’s Water and Forestry Department on integrated pest management and literacy. World Education then expanded its programming with a second major grant from USAID for capacity building of local NGOs and staff from international assistance agencies in nonformal education, training, program design, and evaluation. The Cambodia Assistance to Primary Education Project, a large national program with the Ministry of Education, Youth and Sport (MOEYS) also began in 1995.

From 2001 onwards, World Education embarked on a series of life skills education programs in agriculture, land mine awareness, and health, including HIV and AIDS. With funding from a variety of European, UN, and regional donors, World Education helped develop curricula and accompanying teacher-training materials on integrated pest management, land mine awareness, HIV and AIDS, nutrition and food security, and child labor, with an emphasis on trafficking. World Education’s work in life skills education has been recognized not only by the Cambodian government, but also by UN agencies and other international development donors.

From 2005 to the present day, as a major grantee of USAID for its education programming, World Education has been a significant force in national efforts to improve the quality of education in Cambodia, working alongside MoEYS to increase access for minorities and girls to primary and lower secondary education, and incorporate life skills education into classroom curricula. Under the recent five-year program called Improved Basic Education in Cambodia (IBEC), activities benefited 136,393 students in 331 schools in three provinces in Cambodia and provided training to over 3,100 school directors, teachers, school support committee members, and commune council members.

In the early 2000s, World Education helped pioneer work on child labor, anti-child trafficking and sexual abuse and safer migration issues in Cambodia, at the community, district, and national level. This work first began in Prey Veng Province with funding from UNICEF, then later with major national level funding from the U.S. Department of Labor, and continues with support from private foundations as part of a cross regional safer migration Initiative called Youth on the Move.

In recent years, World Education has expanded its educational quality improvement efforts to the early grades with the recently-completed Total Reading Approach for Children (TRAC) project funded through a joint initiative of USAID, World Vision and Australian Aid. At the beginning of 2015, the tools and methodologies developed by the TRAC project were extended in the TRAC+ project, funded by World Vision and implemented by World Education – Cambodia. In the TRAC+ program World Education will bring early-grade reading benchmarks and a Rapid Response System to target interventions at students’ specific difficulties.

Recent years have seen World Education Cambodia become a leader in the field for integrating technology into its programming strategies. The organization has become well known for its pioneering work to establish sustainable, cost effective thin-client computer labs – a model that has now been taken up by MoEYS, ADB and USAID. A recent mLearning smartphone application to improve reading skills and a second application for teachers that digitizes and automates continous assessments in early grade reading have also gained national attention. Additionally, World Education has recently developed a website and Interactive Voice Response phone line for migrant youth, coupled with interventions to improve digital access and skills, as parts of its safer migration programming.

Recent events have provided clear manifestations of the strong leadership that World Education provides in Cambodia’s education field and the support that the organisation receives from the government and major development agencies. For instance, in June, the US Ambassador made a trip to visit World Education’s work.

On August 25-26 2014, the Minister for Education, the Secretary of State for Education and the Directors of all 24 Provincial Offices of Education attended a national meeting to learn about World Education’s five year IBEC program. This meeting was the first time ever that the MoEYS has assembled all its education leaders to gain experience from an education project.

After nearly 20 years of active engagement in capacity building of our Khmer staff and staff from collaborating ministries and other development agencies, World Education is proud of the role it has played in promoting equitable and local development in Cambodia. A significant part of that local development has been building the capacity of our local staff to take an increasingly more prominent role in the management of the World Education Cambodia country program. In 2012, Kim Dara was named as the World Education Cambodia country director. He is supported in his role by a well-trained and very talented group of Khmer staff, many with more than 20 years of professional engagement in ensuring their country’s future.

World Education improves the quality of life through education for half a million children and adults in 22 countries. World Education’s programs promote individual and collective change: Our training programs improve adult education, help displaced peoples, stem the tide of HIV, and reduce violence through conflict resolution. How do we do it? World Education is a leader in building the skills, knowledge, and resources of local groups so they can accomplish their missions effectively.

We use experiential and engaging teaching techniques to help people and organizations develop skills that build on the learners’ context (cultural, linguistic, geographic, and economic), and include vital information about life and livelihoods—health, agriculture, and small business development—that learners can put to immediate use.

Founded in 1951 to meet the needs of the educationally disadvantaged, World Education has worked in over 50 countries in Asia, Africa, and Latin America, as well as in the United States. Working in concert with private, public, and nongovernmental organizations, World Education initiatives support effective local management and promote partnerships between local organizations.

For more information about World Education’s programs around the world, please visit www.worlded.org.